We're Getting Mutants in the MCU - The Loop

Albind are the most intellectually evolved of the many silicon beings that reside in the sulphuric acid super-lake on the darkside of Wreel. Albinid inhabit a silicon-based organism similar to what the humans would call coral. They have existed in a symbiotic relationship with this crystal coral for the majority of their evolution. Adapting it to suit their growing needs, the green silicon has been molded into a massive pyramid of life. This pyramid, dubbed Silicon Mountain by the humans, is crowned with emerald, tear-drop pods - exponentially increasing in size - spiraling like a galaxy toward a majestic central structure that houses the Albinid royal family.

The Albinid are the most intelligent of all races, including humans, and have altered the human technology to suit their unique physical attributes.

Albinid utilize telepathy to communicate on a level not understood by the humans. Because of this they can not communicate the names and classifications of their society to outsiders. Humans began their own classification system and based many names on human language and concepts.

The evolution of silicon-based lifeforms is substantially faster than that of their carbon-based counterparts. As a result - if the Albinid could swim deep enough toward the molten floor of the lake - they would pass each stage of their evolution. At the bottom they could see the first iteration of their evolutionary cousins.

The most evolved version of the dominant silicon family, the Albinid occupy the top-level of silicon mountain with their elite

actually extending above the acid into the Emerald City.

Albinid are white crystal beings that utilize chemical and mechanical engineering to graft silicon-based weapons, armor and mods directly onto their bodies.

Within the depths of the acidic super-lake there exist beautiful crystal orbs of varying size and color. The Albinid have recognized that these organisms are highly intelligent with advanced levels of consciousness. Similar to the human Encephalon, the crystals are used as a brain within constructs. Their intellect varies with both size and color but is typically higher than their Encephalon counterpart. An Albinid chemical engineer can quickly and inexpensively develop lesser Scry in a lab but these tend to be of slightly lower intellect when compared to their natural equivalent.

Scry are classified as floaters. They have the appearance of three snowflakes vertically intersecting in the center. To utilize their consciousness in battle they must inhabit a construct. The Scry occupy a sphere filled with electrically charged sulphuric acid.

Modulus is a modular construct that is controlled by multiple floaters. Each module will act congruently when connected to the alpha module but will become an independant unit when detatched. The number of modules will vary from 3 - 7 and can be outfitted with more advanced floaters to increase attributes. The swarming tactics of the modulus allow it to do more damage when separated but will reduce the collective HP that the units would have as a whole.

The floaters that occupy each module vary in color and size but have less intellect and psionic ability than that of the Scry. When combined, however, these floaters can become every bit as effective as the Scry. Actual structure of the modulus construct will vary based on the technology of the mechanical engineer manufacturing it. 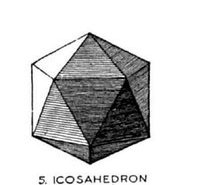